Go to the following link and explore some very important Sake terms Glossary-of-important-terms.pdf.

This terms will help you a lot on your way to the Certified Sake Sommelier..

Have a nice day and kanpai by Suwine..

Red Carolina SELECT is of medium strong garnet red colour. It has an elegant smell, is matured and has a distinctive smell of ripe black currant. In the mouth the wine is dry, tasty, with fine ripe tannins. The taste is complex, strong, creamy, with nice sweet tannins, which shows a long life expectancy. A very complex wine with a long after taste and a long life.

Geographical origin: The winegrowing district of Goriška brda is characterised by a hilly reflief and a mild sub-Mediterranean climate.

Type of soil: Marl and sandstone.

Vineyards: In the heart of terraced vineyards named Južno there is the oldest parts of the vineyards, over 70 years old. The growth and fertility in this vineyard is slow, which enables late harvesting.

Harvesting: Manual picking of grapes in the first half of October.

Vinification: The grapes are macerated for a month. The wine matures for 24 moths in 225L barrels at a constant temperature and humidity. We use 25% of Slavonian oak, 65% of French Allier and 10% of French Troncaise oak.

The dual climate of Champagne region...

The Champagne terroir has two major distinguishing features: northerly latitude and a dual climate that is subject to oceanic and continental influences alike.

A geographical location at the northernmost limit of vine cultivation

In Champagne – and this is the terroir’s primary distinguishing feature – the vines are planted at the northernmost limits of their cold tolerance. Average annual temperature in Reims and Epernay (latitudes 49°5 and 49° North) is just 11°C (50°F). Vines, like all plants, require appropriate weather conditions and in the Northern Hemisphere, rarely thrive beyond latitudes 50° North and 30° South.

The Champagne terroir’s second major distinguishing feature is its dual climate, which is predominantly oceanic but with continental tendencies. This complex weather pattern distinguishes the Champagne viticultural zone from the other terroirs in the same group. The annual mean temperature tends to be higher with no major fluctuations from year to year.

That said, the oceanic influence keeps temperatures on the low side, with little variation from one season to another.

(Variations in temperature from January to July (°C/°F).

Champagne receives barely 1,650 average annual hours of sunshine compared with 2,069 in Bordeaux and 1,910 in Burgundy. The growth rate is accordingly limited, giving the grapes the freshness and crispness that Champagne requires.

The continental climate puts the vine at risk of devastating frosts

Discussions between the original six producers behind Corpinnat (rising to nine over the course of 2018) and the governing body of Cava to accommodate the new designation have been on-going ever since but appear to have finally broken down, leading to the rupture.

The principal reason for the break appears to be a refusal on the part of the DO to allow ‘Cava’ and ‘Corpinnat’ to appear on the same label, even though DO Penedès has agreed to its use.

In a statement, released on Wednesday 30 January, AVEC said: Inspite of the intense negotiations between AVEC and the DO Cava, it has been impossible to reach a satisfactory solution between the two parties, and the wineries associated to Corpinnat have been forced to abandon the DO even though they set up the brand with the clear will to continue within the world of Cava.”

The primary drive behind Corpinnat (further explanation below) is to produce wines solely from Penedès rather than from the much broader area in which Cava is permitted today.

According to AVEC, the on 22 January the Cava DO gave the group an ultimatum not to continue with the plan and to abandon all promotional activities by the end of January.

“For this reason,” AVEC continued in its statement, “and faced with the impossibility of finding, in the current context, a solution that allows for this coexistence, and without shutting any door to the future, CORPINNAT faces a new stage with the undertaking of continuing to work for the good of the whole sector, in favour of the agricultural sector as the motor for change and transformation and with the objective of positioning the top sparkling wines that are produced in the heart of the Penedès among the best in the world.”

On the hand, AVEC conceded, talks with the new board of directors of the Cava DO, “have been constructive for the sector overall, and as a result of this the Regulating Council have incorporated in their ideas the possibility of zonification in the future within the limits of the Denomination of Origin.”

It would also appear that those producers choosing to label under Corpinnat will have to drop designations such as ‘Gran Reserva’ (only allowed for Spanish sparkling wines labelled ‘Cava’) and various ‘Paraje’ classifications. 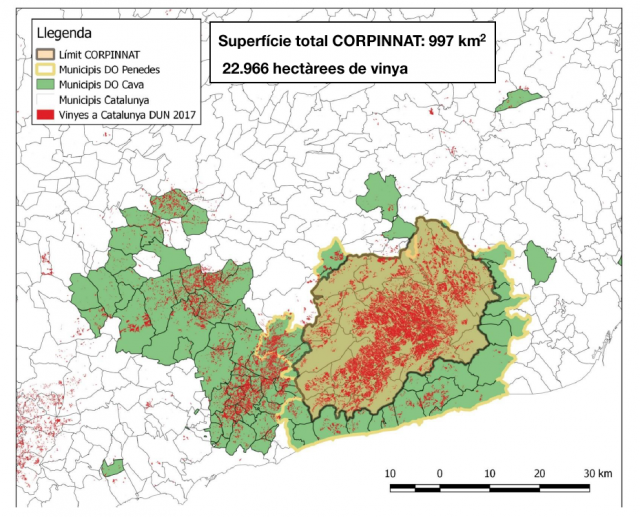 Corpinnat was first formed back in 2015 by six Cava producers, Gramona, Llopart, Nadal, Recaredo, Sabaté i Coca and Torelló, with the aim of creating a stricter and terroir-driven Cava based solely on Penedès and with a focus on organic agriculture, longer ageing times and minimal use of grapes such as Chardonnay and Pinot Noir, as well as hand harvesting and no purchasing of bulk wine.

They received formal recognition by the Catalan government in 2017 followed in December of that year by the Intellectual Property Office of the European Union.

Meetings between the Corpinnat Board and DO Cava authorities began in February 2018.

Therefore, the first wines bearing the name will appear on the market this spring.

The requirements for the producers are:

In effect, the regulations entirely forbid Cava’s three biggest producers, Cordoniu, Freixenet and García Carrión, from labelling any of their wines as Corpinnat, which itself points to the underlying fractures within the DO that led to the creation of Corpinnat in the first place, with smaller producers feeling themselves marginalised and the course of the DO entirely directed by the dominant triumvirate.

This is not the first break with the Cava DO that has taken place, with Raventos i Blanc having left in 2012. As wine writer Miquel Hudin has noted here, subsequent attempts to mollify smaller, quality-focused producers with the introduction of ‘Classic Penedès’ in 2013 and then the pyramidal ‘Paraje’ structure in 2017, have failed to satisfy those still bent on a proper delimitation on what Catalonian Cava should be (Cava is technically a method of production not a reference to an area even if 95% of Cava is produced in and around Penedès).

The name ‘Corpinnat’ derives from two words. The first is ‘Cor’ which means ‘heart’ in Catalan and the second is ‘Pinnat’ which derives from the etymological root ‘Pinnae’, itself the origin of ‘Penedès, and comes from the Latin ‘pinna’ meaning rocky or craggy.

So one might roughly translate Corpinnat as ‘rocky heart’ is one were being more literal or ‘heart of Penedès’ if one were being more direct and the name has clearly been chosen to reflect the association’s belief that Penedès represents the true cradle (or heart) of sparkling wine in Catalonia.

What the loss of nine, highly respected wineries means for DO Cava is the next important and perhaps not instantly answerable question, as is how well the new Corpinnat classification will fare out on its own in the world. Will they eventually push for a DO themselves? Time will likely tell.

More information on the group can be seen on its website here.

Luxury car brand Porsche has produced an own-label wine – a blend of Chardonnay and Pinot Blanc from Austria – to commemorate its 70th anniversary.

Cuvée 356 has been made by Austrian winemaker Armin Tement, in homage to the fact that it was in Austria where the first Porsche sports car was made.

It was in the summer of 1948 that the brand’s first sports car, the Porsche 356 “No. 1” Roadster – designed by Austrian Ferry Porsche, son of Ferdinand Porsche – made its road debut, having been built in Gmünd within the Austrian state of Carinthia.

The winery chosen to produce the cuvée, Tement in southern Styria, was founded in the 1980s by Manfred Tement. The estate is located in Ehrenhausen, on the border between Austria and Slovenia, and around 250km from Gmünd.

The wine is a blend of 65% Pinot Blanc, 18% Chardonnay, 12% Sauvignon Blanc and 5% Pinot Gris, handpicked and aged on their lees for six months, resulting in a “complex and elegant wine with profound minerality and long-lasting spiciness”.

The wine was first served on 8 June at the official celebration held at the Porsche Museum in Stuttgart-Zuffenhausen.

It will be available at Porsche’s Christophorus restaurant in Stuttgart, and also in the museum shop. Wine importer Baron von Essen will supply selected on-trade, while individuals can order the wine for €19.50 per bottle, with a minimum order of 18 bottles.

Time to say goodbye -GEOFFROY TO STEP DOWN AT DOM PÉRIGNON

Richard Geoffroy will step down as cellar master of Dom Pérignon on 1 January 2019 it has been confirmed, and he will hand over his duties in full to Vincent Chaperon.

Geoffroy has been at the head of the prestige cuvée for 28 years and Chaperon has worked under him since 2005.

Since beginning the role in 1990, Geoffroy has declared 15 vintages of Dom Pérignon and reworked the late release stock with the ‘Pléntidues’ concept – known as P2 and P3.

In a statement announcing the change, the house said: “Geoffroy has enriched, refined and shared the universe of Dom Pérignon experiences, working with culinary luminaries such as Ferran Adrià and Alain Ducasse, as well as artists renowned for their creativity including David Lynch, Jeff Koons and most recently Lenny Kravitz.”

He has worked with Geoffroy since 2005 and worked on 13 harvests and four declared vintages with him.

“Too much of anything is bad, but too much Champagne is just right“

"Too much of anything is bad, but too much Champagne is just right" Zitat: F. Scott Fitzgerald